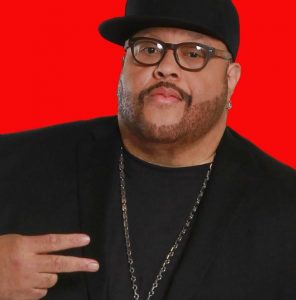 For more than 35 years, music lovers around the world have known Grammy Award Winning artist Fred Hammond as a Christian concert star. To many, he is a gifted vocalist, songwriter, musician, producer and arranger. However, according to his peers and supporters alike he is without a doubt the best architect behind the creation of a unique experience in gospel music, urban praise, and worship all together. Without him, this new genre of gospel music did not exist before. As a result of that, Fred Hammond has become one of the most well respected names in the music industry!

Throughout his professional music career, Hammond has maintained a reputation of excellence. Very few gospel artists can boast of their consistency in sales, radio airplay, and concert appearances. He is a solo artist, founder of the pioneering urban group called Commissioned, and has worked frequently with Radical for Christ. All together, Hammond has sold over 8 million albums which have made him a mainstay on Billboard’s Gospel Chart Top 10. His previous release {Pages of Life} Chapters I & II exceeded both Double Platinum status and held the #1 position on the Billboard Gospel Charts for over 15 weeks. His 2006 project, Free To Worship bombarded Billboard’s #1 position on the Gospel Charts and was hailed as one of the year’s best-selling gospel albums. He has also had debut independent release entitled “In Case You Missed… And Then Some” sell well over 200,000 copies worldwide.

Beyond Hammond’s individual success, his achievements as CEO of Face to Face Productions and the FHammond Music Label have expanded his credentials even more. Since their creation, Hammond has served as a top producer on more than 100 album projects, that have all racked up numerous awards and nominations. These nominations have included Grammy, BET, N.A.A.C.P. Image, Stellar, Dove, and GMWA Excellence Awards. Over the years, he has gone on to produce several other specialty projects including his Jazz album titled “Grandad Turner”, which is a project dedicated to love, relationships, and marriage. “God, Love, and Romance, and the formation of the United Tenors” is another incredibly relevant, yet nostalgic presentation of a modern-day quartet which has earned them multiple hit songs and several awards/nominations in the year 2013.